EMU, further, made application for additional exploration leases bordering the western and northern margins of the Gnows Nest and Monte Cristo tenements and which encompass the acquired prosecting licences.  The Monte Cristo Gold Prospect is scheduled to receive an RC drilling programme in the first week of January 2021 in which interesting historical exploration data will be tested. 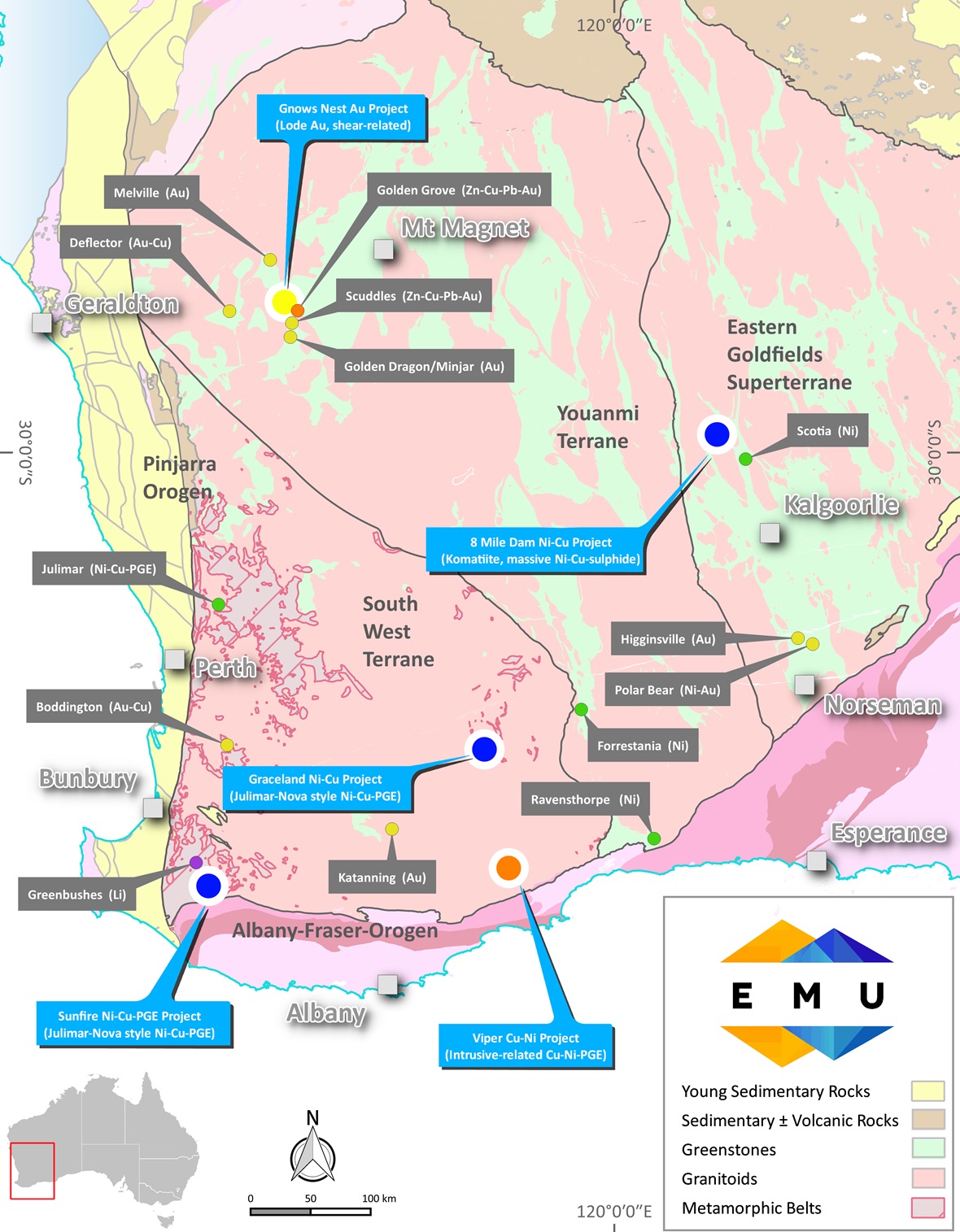 The Project tenements overlay a complex structural flexure within the Archean Yalgoo-Singleton greenstone belt, which is bound by the Badja and Walgardy intrusive granitoid batholiths of the Youanmi Terrane to the east and west (Figure 3). The greenstone stratigraphy in the Gnows Nest area comprise mafic and ultramafic intrusive volcanics with intercalations of banded iron formations, banded cherts and an argillaceous sedimentary sequence. The greenstones have a general north-northwest trend but are flexed northward in the vicinity of the Gnows Nest mine. The rock sequences generally dip steeply to the west. 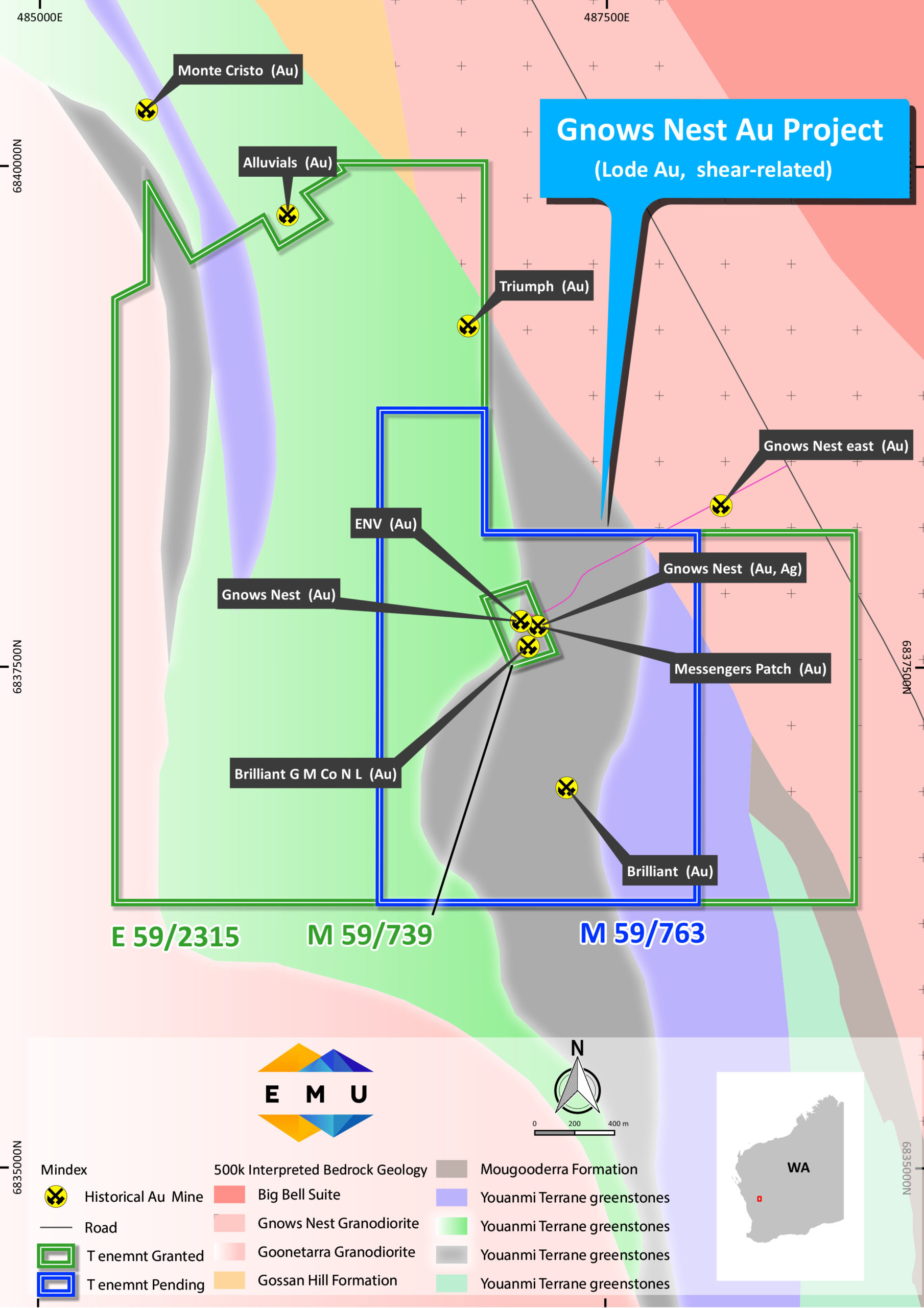 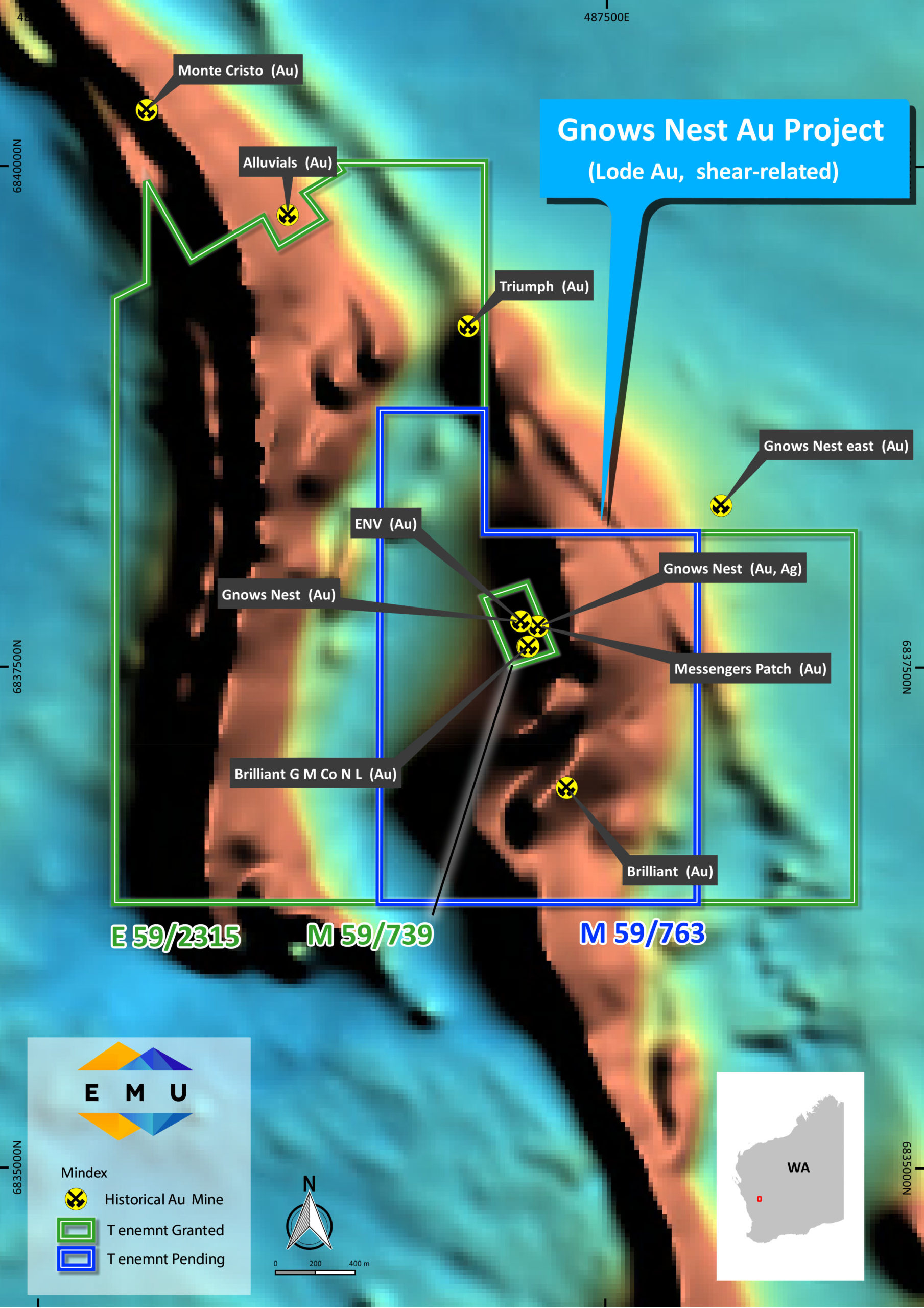 At Gnows Nest, historical gold workings occur over a 380m strike length, hosted within a 345o trending shear zone, dipping 57o west and averaging ~10m in width, characterised by talc-chlorite schists hosting individual mineralised quartz veins varying between 0.5m to greater than 5m, but typically ranging to 2m. The shear zone is interpreted as a dextral strike-slip fault separating gabbro to the west from metasediments, banded iron formations and cherts to the east.

Historical gold production from Gnows Nest was mostly via the main shaft system (Figure 4), however significant production shafts were sunk 100m (Shaft B) and 120m (Shaft A) to the north and 150m (Shaft C) and 210m (Shaft D) to the south.

Underground mining extended to 5 levels (~135m deep) exploiting a central, steep-plunging ore shoot over a strike length of 80m in the main shaft area. More recent surface alluvial/colluvial mining was carried out in the northern and southern areas of M59/739. 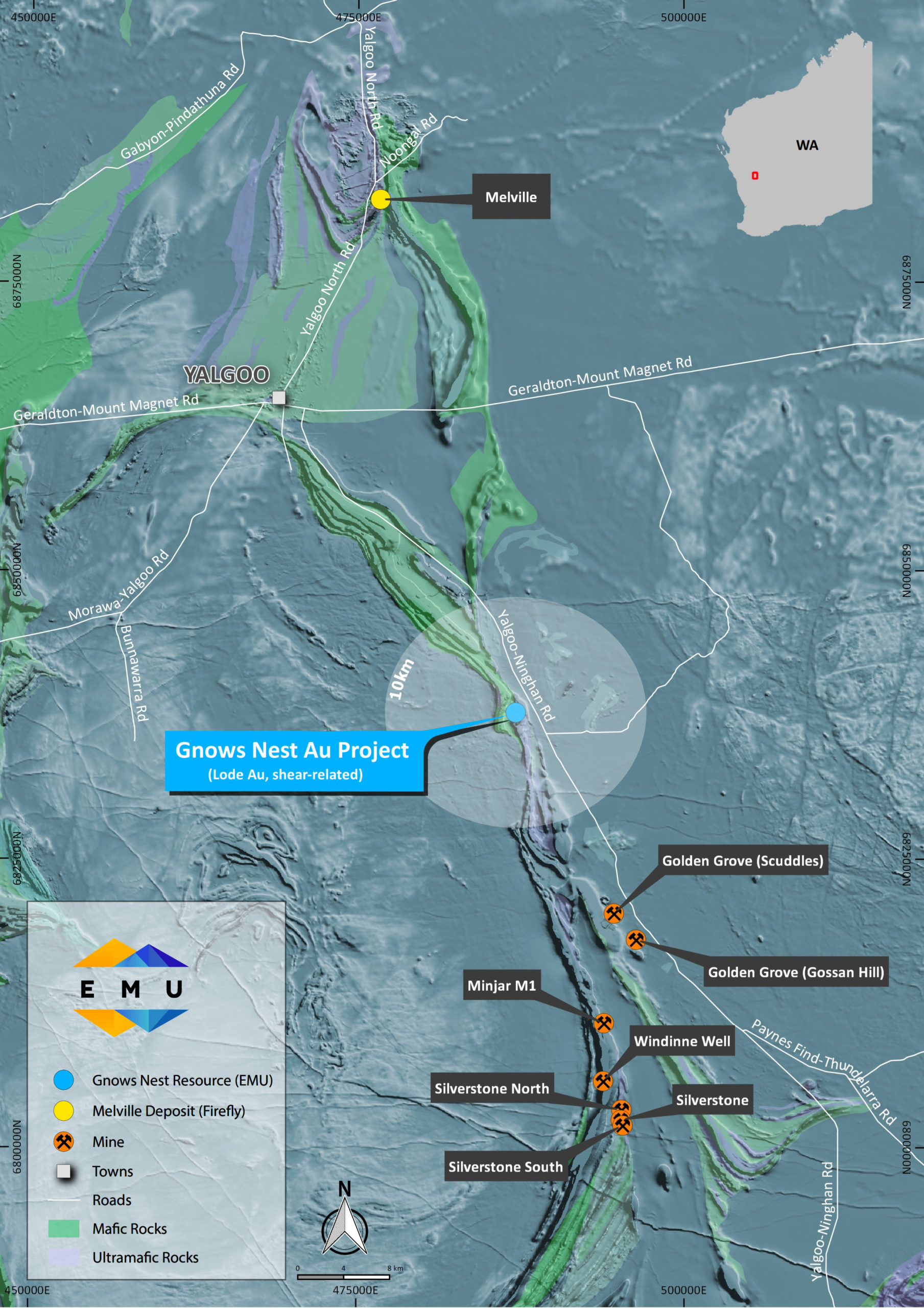 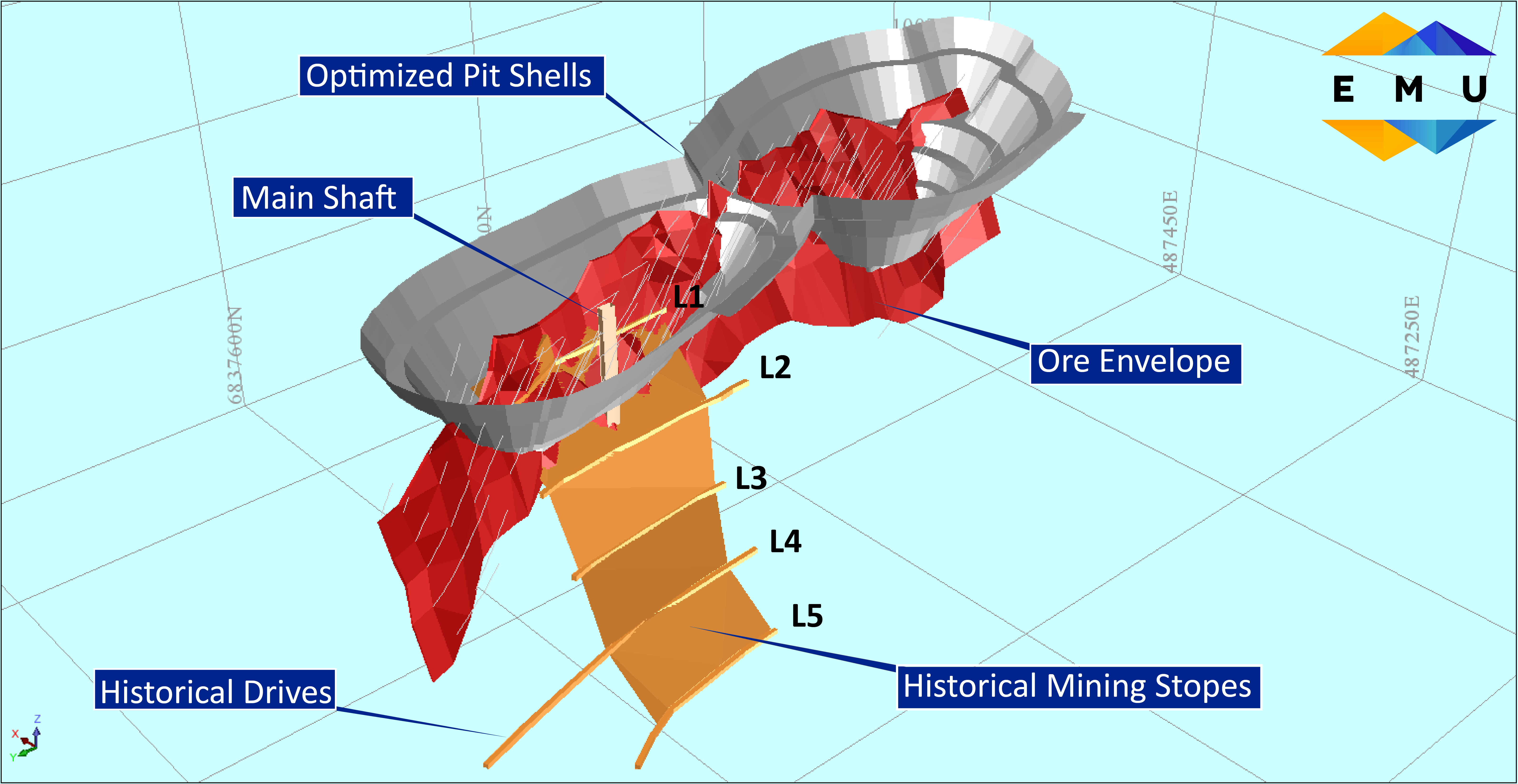 The Gnows Nest mine area was pattern-drilled by Coruscant on a 10m x 10m grid to a maximum depth of only 54m allowing for a resource estimate to be completed. The Mineral Resource reported in accordance with the JORC Code (2012) 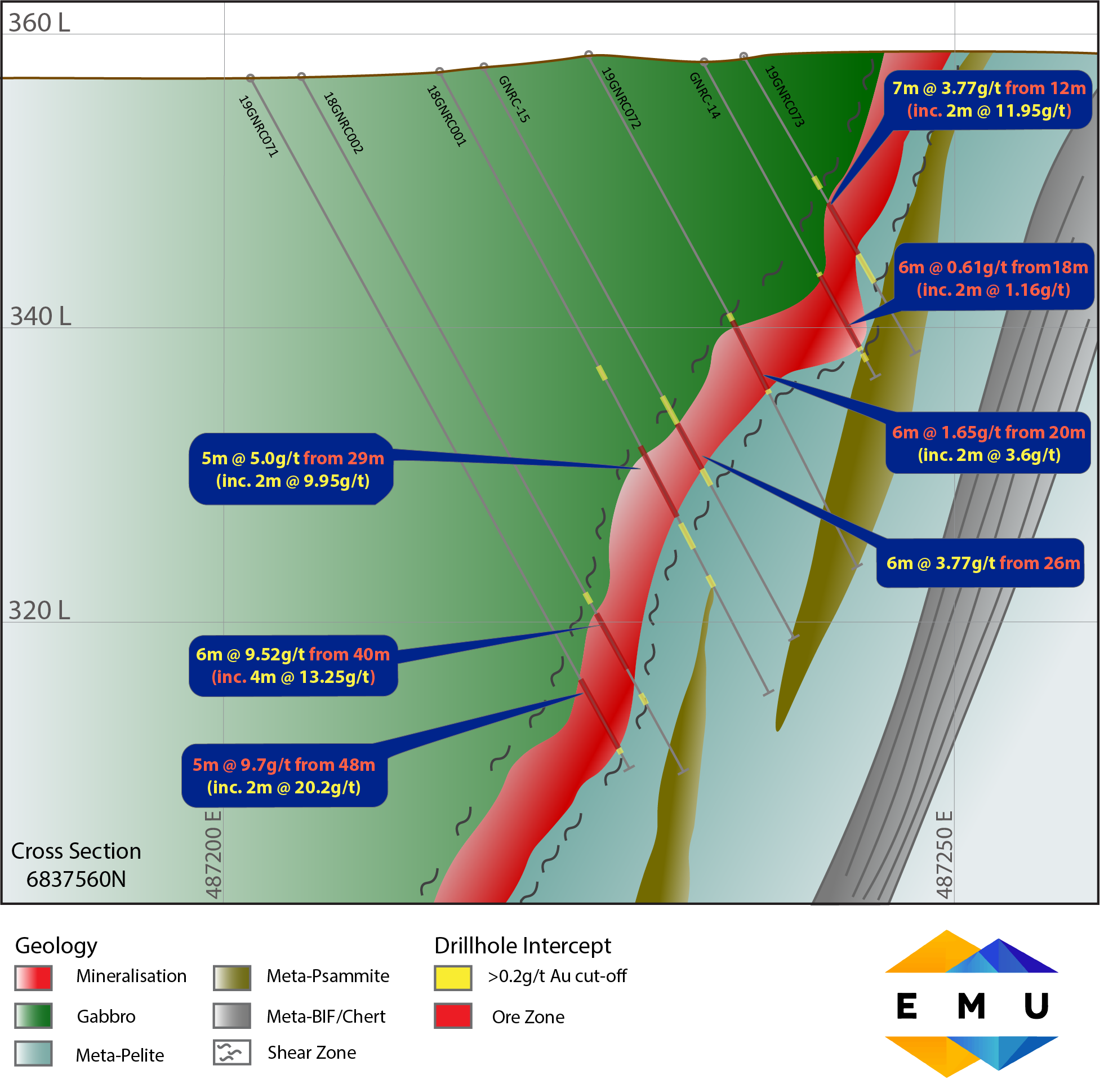 EMU’s priority at Gnows Nest will be to advance the Mineral Resource as a near-term production opportunity via a simple shallow open cut gold operation for possible toll treatment.

The Project, which encapsulates an historic gold mining field, will also be the subject of ongoing exploration directed at growing the resource base. The potential for further high-grade gold discoveries associated with other dilational zones within tenement package is considered high.

Coruscant’s drilling highlighted the strike and depth potential of the Gnows Nest shear zone outside of the historically mined area with numerous high-grade intercepts reported within the 400m long resource envelope.

In particular, the deepest drill hole (GND-01) intersected 2m @ 7.35g/t Au from 187m including 1m @ 14.50g/t Au, confirming that the high-grade mineralisation persists at depth well below the historic mine workings.

The Gnows Nest shear zone has been traced further south into Mining Lease (application) M59/763 with only wide-spaced drilling completed.

The geological setting of the Project is also considered favourable for VMS base metal mineralisation, being located along the same greenstone belt that hosts the world-class Golden Grove copper-zinc mine and in close proximity to several VMS discoveries recently announced by Venture Minerals Limited (ASX: VMS).

EMU’s initial exploration program will comprise IP geophysical surveys centred on Gnows Nest to trace the mineralised shear along strike and explore for structural repeats. EMU has designed a RC drilling program of 8,000m to improve confidence in the previously defined resource, test for extensions along strike and down dip, and evaluate other priority regional targets.